Community Day of Learning and Action!

“An oasis on a grey day”

On Tuesday 30th October, if you had walked in to the Church space at the Bromley by Bow Centre you would have been greeted with smiling faces, a warm buzz and a real sense of community. This was the first, of hopefully many, Community Day of Learning and Action (CDLA). It was volunteer-led day that brought members of the community into a space designed to help stimulate growth, solidarity and empowerment.

Speaking to Sue Agyakwa about the motivation behind the day she simply says that there is a need for it, a need to connect- “professionals go to conferences and corporate events to meet others, but where do volunteers go?” 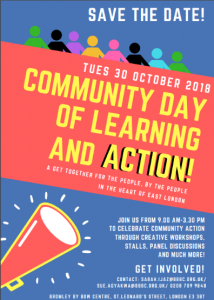 The morning was kicked off with a breakfast, followed by presentations of the lived experiences of different members of the community. From Darren’s who set up Meade TKD while being partially sighted to Tarana who has had a short story published in an anthology. Each presentation, in their own way, touched upon the ease that one often feels of giving up. However, they spoke of inspirational experiences on how we can fight that urge and push forwards. This echoed an aim of the day: to identify and find out about things that help us.

In the period of reflection later in the day, many participants spoke of how simply being with people was helpful and encouraging. Healthy communities need holistic approaches, such as the CDLA, which work across the full breadth of social determinants not just clinical interventions. 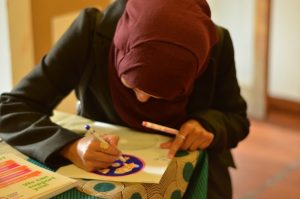 After a short participatory introduction to Falun Gong, led by Soon Chong, that awakened our bodies, we were invited to engage in mini-workshops. These were run by both staff members at the Bromley by Bow Centre and local individuals. These ranged from knitting tips from women of Blackwall Reach to money saving. These breakouts allowed for barriers to be broken down between ‘client’ and ‘professionals’, allowing for meaningful discussion and knowledge sharing to happen.

A communal lunch gave us space to develop connections with others. Again we participate in Falun Gong and further explored its history and current context. We were then treated to a short performance of theatre. The piece explored different stages of life, as experienced by those in the group, demonstrating that the world really is a stage. The whole group was then taught a song to sing in the round: timidly at first, but reaching a crescendo as confidence in the room swelled. These activities were ones that many had never participated in before, but for some gave them a “different sort of confidence and joy”. 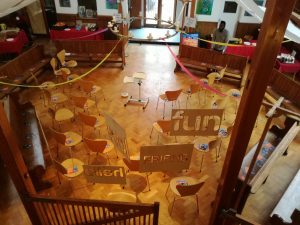 An important part of the day for the group, both as a collective and as individuals, was to create actions to fulfil in the future. In an open forum at the close of the day we began by reflecting on the day. It was wonderful to hear the positive affect that the day had. Participants felt that it really was a community day in which they all had the power to shape and build it – allowing it to mirror the community they would like to see. As part of this, all voices were “given weight and treated as equal”. One commented on the fact that being with people was a way of gaining mental strength and that it was “an oasis on a grey day”.

Sue argues that it was a chance for all involved to “challenge ourselves”. In essence, to break down the ideas of who can and cannot play a role in making decisions. For example, she points o the language that is used to separate those involved – organisers versus volunteers versus participants. Ultimately, we should be aiming for coproduction, to be working alongside each other in a horizontal and equal manner.

Lastly we explored the question of ‘what next?’ in order to come up with tangible ideas of action from the day. For individuals, many actions centred on further involvement in groups and activities that had been presented and that they had explored throughout the day. Hopefully, if this is acted upon, this will create a reciprocity and a continued feeling of community and growth – extending the aims of the day to outside the limits of the day itself.

As for the group’s actions, with positive responses to the day there was a strong support for another CDLA to happen, and for it to grow! Worries of capacity were dispelled with feelings of solidarity and togetherness. As Sue Agyakwa pointed out “in the end, with solidarity and commitment a lot can happen in a very short space of time!”